Even although I am so tired I am still gonna tell y’all about the Haldon Heroic. (Truth is: I lost the ‘who’s blogging this one’ coin toss with JB)

Today was an early start for the Heroic CX-Medio. Medio people. That’s important.

Last year JB introduced me to racing at the Haldon Heroic Micro. Yes – Micro. 15 miles. Not Medio. Just sayin’. Against the clock and also people, I surprised myself by completely loving it and we vowed we’d enter again this year. There were a couple of differences last year. We were on MTBs, JB rode Strumpet and I rode my Marin hardtail – Vinnie and we pottered from stage to stage, going full bore on the racy bits and enjoying the scenery for the rest of the time.

Basically, the Heroic is a CX sportive with 4 stages against the clock, linked together by quiet roads, bridleways and un-metled roads. In theory it’s Right. Up. Our. Street.

So we entered the Medio. 35 miles. That’s ok, we regularly do 20-25 miles of this sort of riding, you could almost say we’d trained… Ha.

At ungodly past 7 we set off for Exeter Racecourse on the edge of Haldon Forest, crossers with their knobbly tyres, clothes for the wet weather that of course was forecast and chocolate, obviously.

There’s a mass start to the first timed section, which takes you a lap around the racecourse. The funny man at the start said “the going is soft”… hahahahaha! Yeah? Y’don’t say. Then a lady in a bobble hat that wasn’t me did some waving. “Oh yeah” the funny man at the start said, “if you’re a lady who thinks you’re gonna be first lady round, please make yourself known, as you’re hard to…*awkward silence… *mutters spot”.

And with that, we were off. Running hand-me-down Racing Robs on my crosser, and only having been off-road on them once before I was curious to see if they were as good as JB reckoned. And who knew? They actually were. I had grip on the grass and was able to cut through the deeper mulch and bogs. Yes, we have mulch and bogs on our racecourses down’ere. A 2 mile loop completed and we passed through the finish of the stage. I was bolloxed. I suspect JB was too, and the realisation was setting in that we had 33 more miles of that. FFS. It wasn’t even hilly. Well, not yet…

Haldon Hill is our local trail centre – we hate it there – so imagine our surprise when we rocked up to the second timed stage, still atop the hill, and it’s the little blue route! Well, we know this route pretty well although we’ve never ridden it on crossers.

We joined the queue for our turn, then skipped a bit of the queue, eager to get on with it, and JB was off. Passing a lady faffing with her toe-clips (whatever that woman says, it was a racing incident, nothing more) and off into the mist. A 20 second gap and I was sent on my way. I caught up Mrs Toe Clips and passed her almost straight away on a wide-enough-bit and set about keeping JB in sight – I could expect to do no more than that! I narrowed the gap briefly but she pulled away again at the end and I could do nothing about it. The trail was brilliant on the crosser, fast, swoopy hardpacked tracks and I set a PR around there, despite having ridden it many many times on the MTB and plenty of times given it full-beans. By the end of it though, I was still bolloxed. 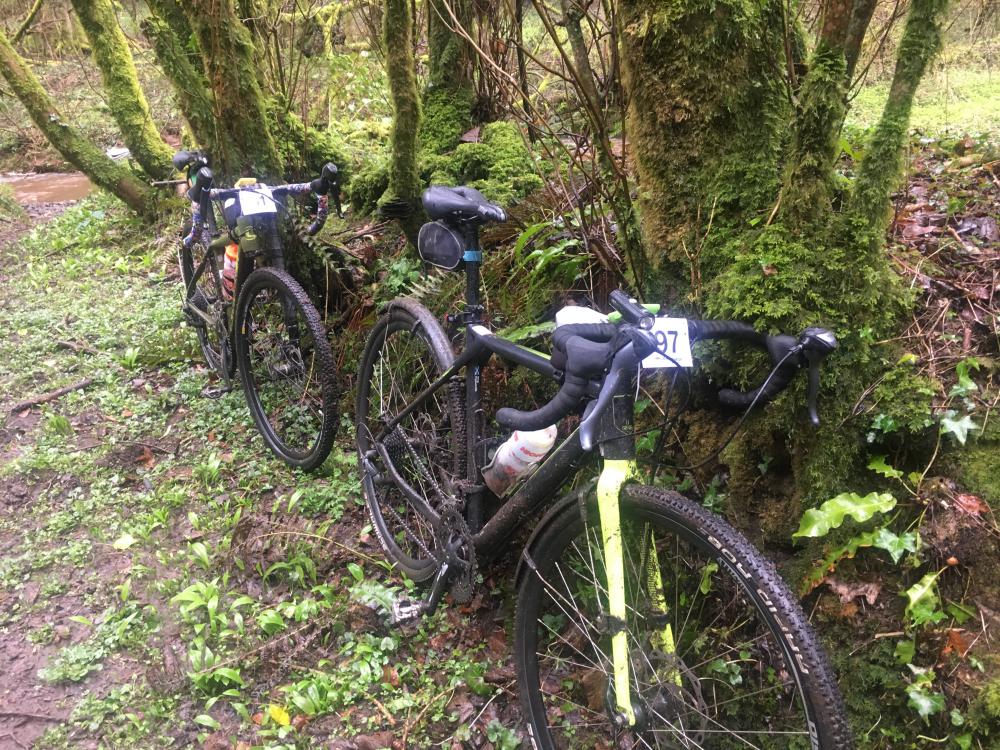 We agreed that Haldon had suddenly a whole new charm. We have a whole area to re-explore on the crossers

Then we got to try a bit more as we joined another blue trail through to the trail centre and off onto the route proper. Which took us down hill fast and off the hill. This was a real cx course and the next 15ish miles were a decent mix of muddy bridleways, muddy un-metled roads, muddy roads, muddy heathlands, and cycle routes. Oh, and hills. 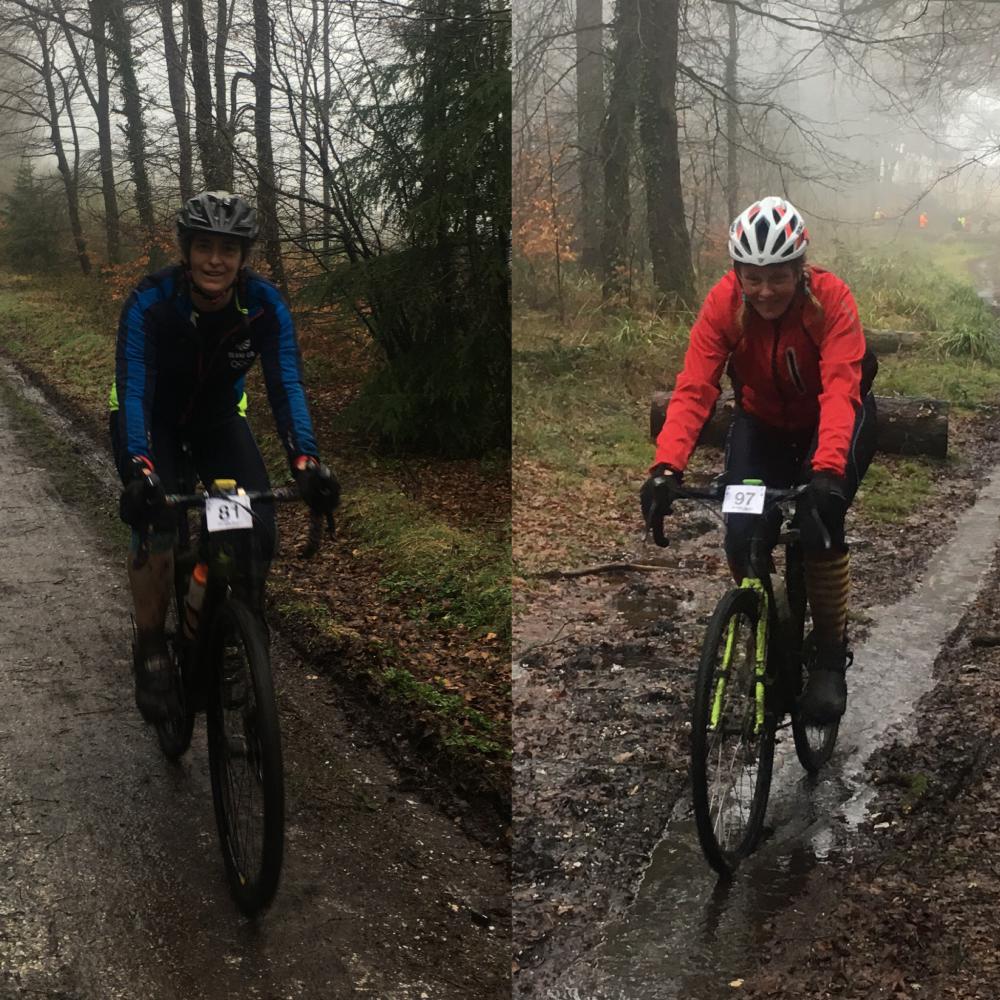 Around this time we latched on to, or rather, were latched on to (that sounds better, doesn’t it?) by a group of burlyboys. We knew they were burlyboys ‘cos of the screaming and falling off and good humoured complaining they were doing. They burned past us on certain, dare I say easy, bits and we passed them on all the muddy bits (where they screamed and fell off) and on the 20% hills, where they complained and got off! Still, they chapeau’d us at all the right spots and on one particular fucker of a climb, we were cheered and I believe there was also applause and fireworks and a whole parade…

It was all a bit tortoise and hare, we just kept grinding on, and when – finally – the garmin clicked over the 25 mile mark (I’m sure it was on 25 for about 20 miles) we perked up a bit as we arrived at the 3rd timed stage. I can’t even remember this stage except it’s where the food stop was. We opted to race (relatively) round and then eat. JB got stuck into the fig rolls *boke and I had a flapjack. Leaving the burlyboys to finish the haribo and remaining fig rolls we set about the final climb of the day. I remarked to JB that I don’t think I have a racing speed. I just have the speed I go. There’s no *next gear*.

I think we knew, deep down, that it could’t possibly be the final climb – we still had 10 miles to fit in somewhere before we got back. Soon enough, passing more folk pushing their bikes up the hill, we were back at the top and a road we recognised. P’raps they’ve measured it short I dared to hope.

No. Of course not. Look at this, a lovely swoopy descent. That can only end one way, right?

Another real steep grind up and we were at the last timed stage.

And lookit who’s here! One of JB’s buddies is doing the timing for this stage – well, surely now we’re in with a chance of a prize. I watch JB do a dodgy handshake… Oh, I shouldn’t have said that… and then she was off. Bit of a pause and so was I.

This was a great section, it was mostly flat, wide trails… Or at least on a sunny summer’s day it would have been… Today it was wet, sticky and the path reduced in places to a MTB tyres width with puddles with gawd knows what at the bottom. I set off with no other intention than surviving. JB was sporadically in sight but in truth I think she pulled away from me, I certainly wasn’t closing the gap. Then a woman I rode past as she walked up the last hill, rode past me. I thought… I shan’t say what I thought, it’s unreasonable and unsporting, and who knew I was competitive. I set out to catch her but to no avail. I re-tasted a bit of flapjack at this point and settled into survival mode. Rounding the corner on a nice flowing bit of fire road I spied her passing a chap in a nice silver jacket. So, unable to help myself, I set about catching and passing him. We were on a gradual climb at this point, and the gap was visibly closing. What’s more, I was gaining on her! One final effort and I passed the both of them and flogged through the finish.

A check of the garmin showed that we had the best part of a couple of miles to potter back to the finish, where we had coffee, jam and cream doughnuts and chocolate covered nuts.

We rode just short of 35 miles and climbed over 2700′ and it took us 3:50 something according to Strava’s moving time. My crosser was magnificent, she never put a foot wrong – the one time she chucked me off was because I tried to make her roll over a hidden log in a puddle. She made much lighter work of the deepest mud, cutting through it where the MTB or Fat would squirm about on the top (oo-er

Today was about the hardest day (so far…) I’ve had in the saddle; it wasn’t a fall about laughing kinda day, but it sure as shit was a cracker, and neither of us said that there was no need to do that one ever again, although we’ve pinky-promised never to do the Haldon Heroic CX Mega. That way lies madness… 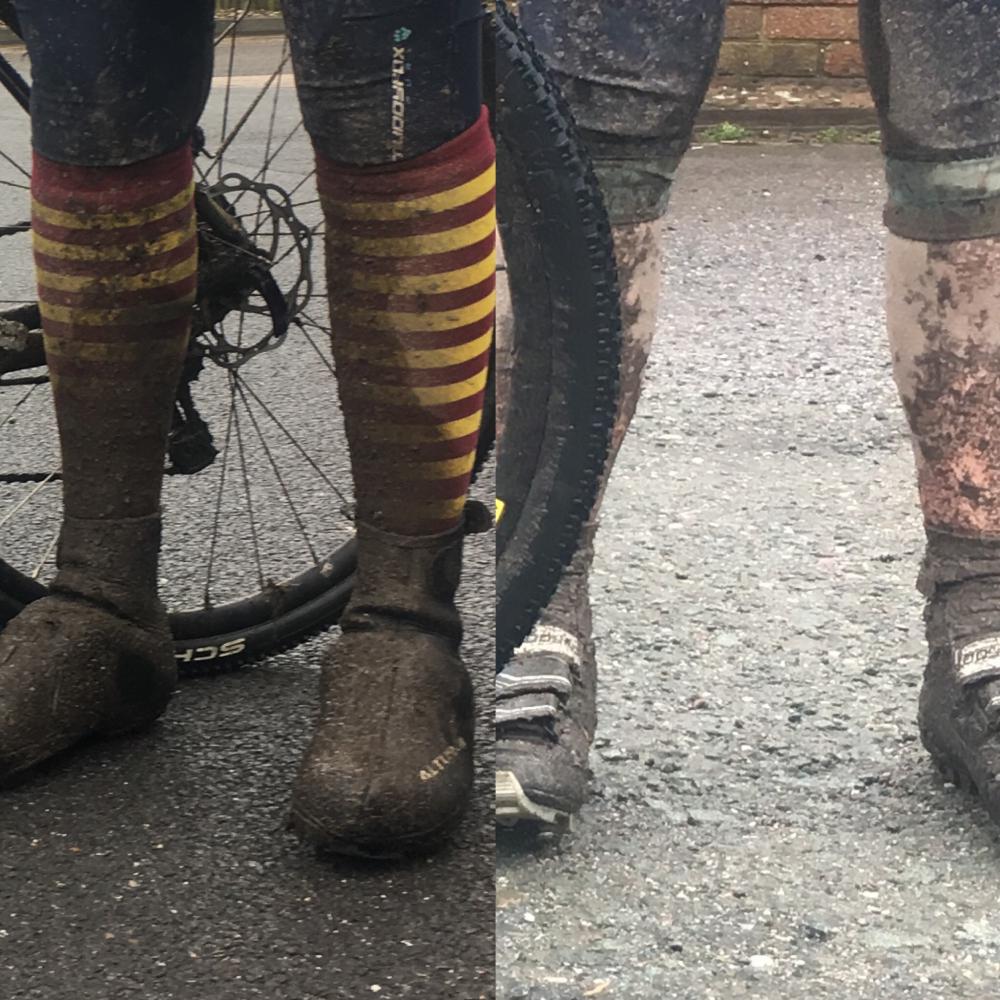 The clean-up operation is complete, knobbly tyres have been replaced ready for tomorrow’s Social/Breeze extravaganza. It could be an all day affair according to my legs…  which are bolloxed. 😉