When the message came through at 8 am on Saturday morning from JB that she was cancelling the Saturday Social ride because Conditions, I was a bit disappointed but on putting in my contact lenses it was clear she had made the right decision. The roads outside the house were sheet ice. Her counter offer was Quantocks on the FATs. I put on Normal Clothes and replied: no matter, I’ll potter up the towpath later when Conditions are better.

I didn’t want to go to the ‘Tocks cos I hate it there. We hafta go in the GFW (Great Fuckin’ Woods) and I always fall off or hafta take my bike for a long walk; but also cos The Others were going. The Others were Missy (twentyfour12 team mate), MrJB (who was on a top secret mission) and MrGotANewToy. They are SO much faster than me and I didn’t fancy a day of them always having to wait for me, and slogging my whossits off trying to keep up.

Then MrMegster said to man up, and so I changed my mind.

The new arrangements saw me collect JB and MrJB went ahead to collect Missy and MrGotANewToy. We arranged to meet them in the carpark, and JB and I decided that we would potter ahead if we got there first. They’d soon catch us up.

I shan’t bore you with the logistics, we got there, they got there, off we all went together. JB, MrJB, and I had our FATs, MrGotANewToy had his new FAT and Missy had her… I didn’t even get a chance to notice what Missy had. 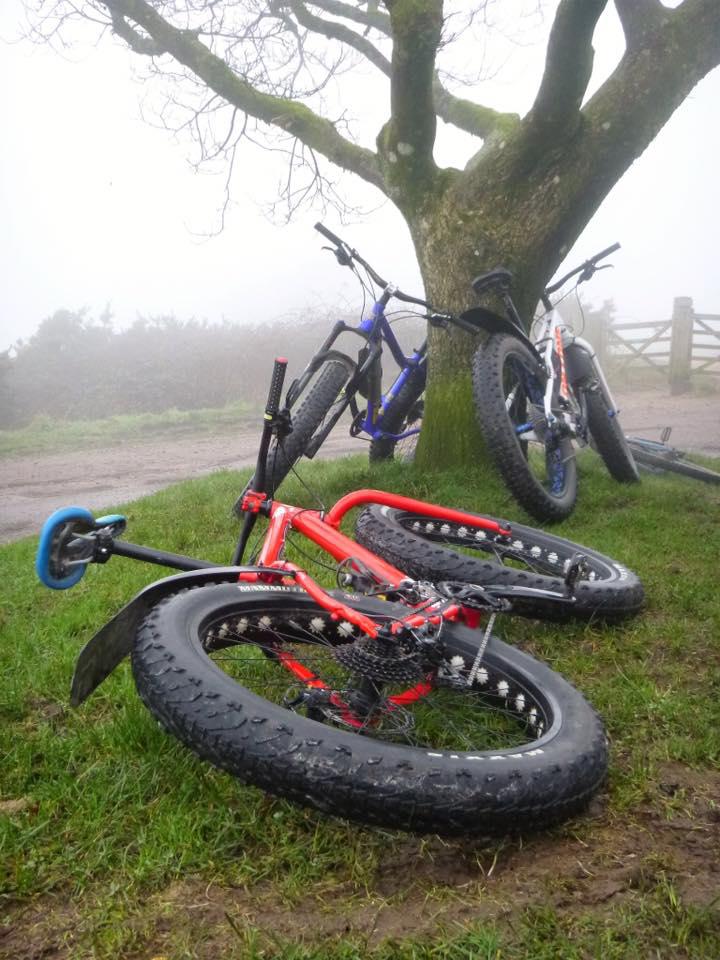 Conditions, I may add were different to those at home. Conditions at home were mainly black ice on the roads. Conditions on the Quantocks consisted mainly of gusty freezing cold winds and freezing fog. Still, we had on all our clothes, nothing could go wrong.

As we set off from the carpark in to the fog, Missy appeared from nowhere alongside, murmured about ‘fuckin’ cold’ and pedalled off into the fog. This wasn’t the last time we saw her, but it nearly was.

When we got to the first ‘junction’ we pause-… Missy paused to let the rest of us catch up. There was a which way we gonnago type discussion and we all agreed. JB went for a quick whassaname behind a tree, I waited and the others went on. THAT was the last we saw of them. 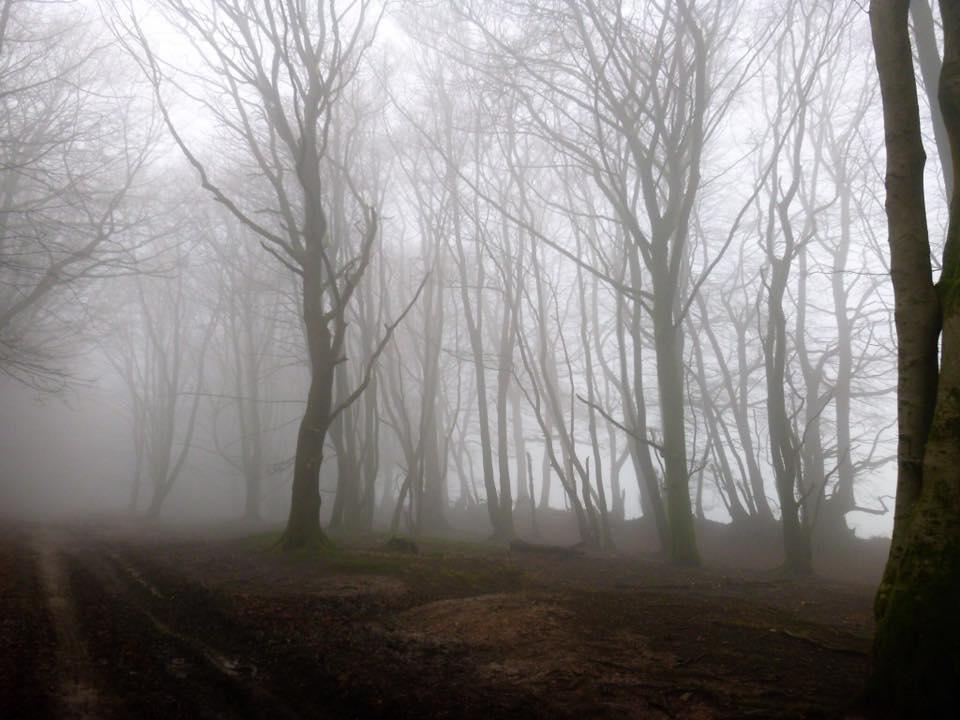 When we got to the junction about half way down the hill we couldn’t decide if The Others had gone that way or not, so we decided fuckit and kept going. At the bottom, they weren’t there either.  So we climbed back up again, deciding fuckit – lets just do the ridge ride, at least this way we don’t have to go into the GFW. But we do hafta get back up this bastard hill. 450 feet in 1.2 miles with up to 12% in places, and we were back where we started.

The ridge ride is lovely. It’s about 7.5 miles from one end to the other, and then the same back again. There’s nothing technical, no roads, just undulating moorland trails, rooty tracks, some quite deep mud, and some rocky descents. I rode more of it on my FAT than I ever have my hard-tail – it’s made me an excellent rider you know

. Having said that, JB and I both got pitched off, almost at the same boggy bit. As I picked myself up, outta the bottom bracket deep mud I glanced up to see JB do the same. Well, that bit is obviously unrideable

With no one but ourselves to please, we stopped to take many, many pictures. The Quantocks were stunning. The freezing fog came out brilliant in the photos; no! Really, it did! There were loads of MTBers out, they all gave us a chirpy ‘hello’ and then a double take… You could see them thinkin’ ‘look at the size of them birds’ tyres’, but not being quite sure if it was ok to say it out loud! 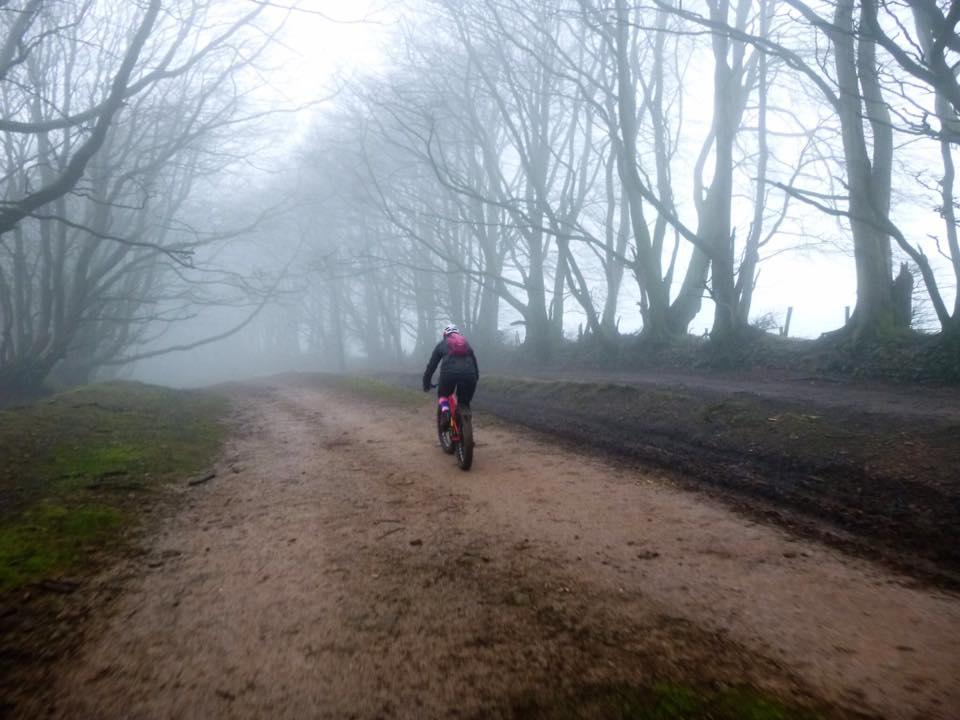 We had our chocolate break at the far end of the ridge, took a couple more pics and u-turned for home, feeling pretty smug and actually enjoying the ‘Tocks. The hill we’d just descended looked steeper from the bottom than it had done at the top… but off we went, almost chirpily. It seemed to me that it was becoming harder than it ought to be, and JB  was beginning to scamper off into the fog…

A glance down explained it…. “bird….

When I caught her up, I explained why she’d been forced to stop in the -2°: Puncture. Well, it had all been going rather too well…

“Lets see if we can get to the next car park before we change the tube” JB suggested. We were about as far from anyone or thing as we could be at this point, and if we’d thought the fog was lifting we couldn’t have been wronger. I tiptoed on as far as I could but JB called a halt cos the tyre was close to coming off the rim. We were atop a hill and could see about 30 yards in any direction.  It was so fucking cold, but proved almost impossible to change the tube wearing gloves, let alone the two pairs I was wearing!  So we, sorry, JB set to work. She’s better at doing these things than me, cos she’s had more practice.

We found the thorn and used our special tools* to remove it.  Then we just had to pump up the new tube. The FAT runs on around 10 psi – shouldn’t take a jiffy should it, to get that pumped up? We took it in turns to pump the tyre for around 2 hours. Well, maybe 5 minutes. We had to take it in turns: a) to keep warm; 2) cos I forgot my (ahem) gas; and III) have you seen the size of a FAT inner tube? It’s pretty much an airbed. 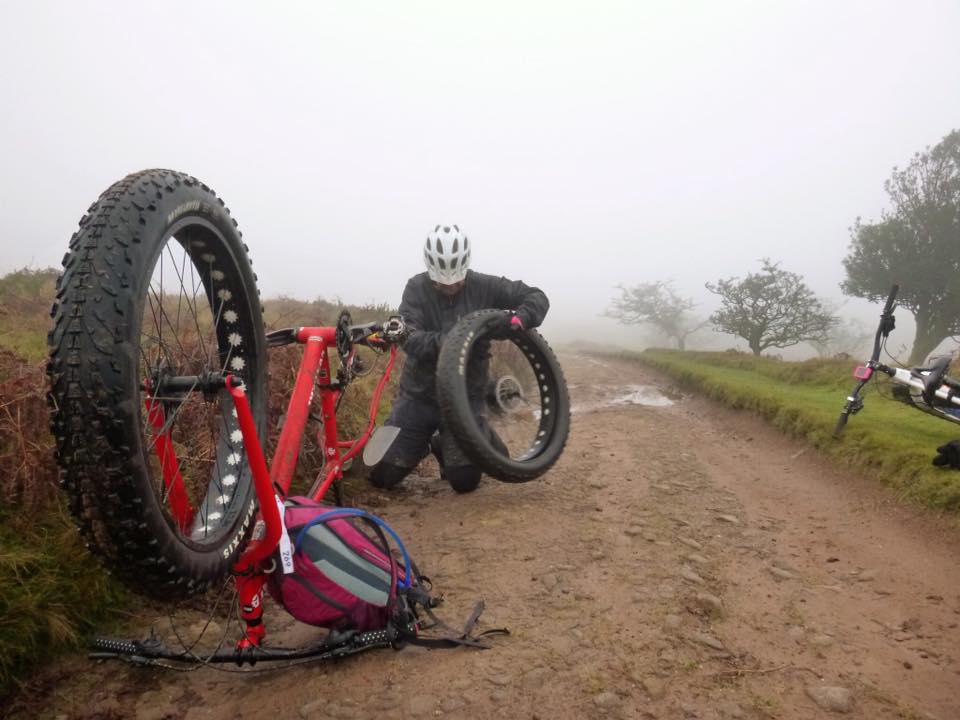 Once on our way, the remaining ride was a doozy. We were back in half the time it took us to get out, mainly cos we were cold and there was far less twatting around (there was still some twatting around). Also coffee and cake awaited in the car…

The Others were gone by the time we got back. A later stalk on Strava showed they did 8 miles and around 850 feet of climbing. Not bad you say? We, the slow, did 15 miles and 1600 feet of climbing. I do know it’s not a competition, I do. But this still raised a fist pump on the way home. I am entirely at ease with being childish.

From a ride that nearly wasn’t, it turned into a brilliant day, again: Conditions were definitely far from ideal, and circumstances didn’t exactly all go in our favour, but it was such a good day, we’ve even said that we’ll go try the GFW next time. But on our own, when no one else is watching, and when no one can hear us scream.

Photos are all JB’s, I take no credit for that part of the twatting around…

I’ve had an excellent day.

A couple of weeks ago, JB asked me if I wanted to ride the Devon Dirt with her. I’d tentatively agreed to this a while ago, so readily agreed. Then she said she’d booked us in, and we were doing it on her and MrJB’s FAT bikes. Whoop! I’ve been secretly hanging for a proper go on the FAT for ages. She’d also agreed with the organiser (who she knows from Days Gone By) that we only had to ride the first half, to the lunch stop. 17 miles on the FATs – how hard could that be?

So we had a coffee, and then got ready again. 😉

We aimed for the back of the start pack, knowing we were slow, mainly due to our engines, but partly because the FATs take some effort on the tarmac uphills.

Once we were off there were a couple of miles of quiet Devon roads, and then a pile up. Well, not a proper pile up. But lots of ‘normal’ MTB-ers stalled at the start of the first trail, which had an exposed rock slope to go up. We let the way clear a bit, pointed the FATs upwards, found a nice low gear and we were off. How easy was this? I couldn’t believe it, the FAT just rolled up the difficult stuff, the only thing I had to do was pedal, the bike took care of everything else, amazing. I was baulked about 20 meters from the top of this first climb by someone tipping off sideways, clipped in. Were it not for that I’d have made the top, something I am pretty sure I couldn’t have done on my hardtail.

This was the theme for the day, this bike surprised me time after time, it just rolls. It rolls over rocks, mud, puddles, steps… you name it. Where the track was rutted and the wheel caught the edge of the rut, which at best would have been a foot down on the hardtail, the FAT just rolled up it, no bother. Awesome.

The payoff for all this awesomeness is getting them uphill on roads, a small pice to pay (and I think, were I fit, it may not have been such a struggle)

The ride itself was everything I love. Green lanes and bridleways, linked by short road sections. Were I not completely bolloxed come the end, I’d have happily gone around again. Stravia says (and she never lies) we climbed just over 2,000ft in 17 miles, over a well signed and brilliant route.

And I wouldn’t have wanted to ride it with anyone else .