Along with V’rap, eL Bee! and Cath, JB and I missed the memo about 13th May maybe not being the best day for riding a bike.

This year for the Dorset and Somerset Air Ambulance Coast2Coast ride JB and I decided to be independent and not demand that MrJB and MrM and TheBoy (TB) drop us off and pick us up. Well, we demanded that MrM and TB dropped us off but we hatched an elaborate plan to get home called: The Train. We’d get some extra training miles after the event and ride to the station which is about 15 miles away. This is Devon, so it wasn’t gonna be that straight forward. We hafta get the train to Exeter, straight past our houses, then back the way we came to Tivvy Parkway station, which is actually 7ish miles away from Tivvy itself. More extra miles…

A phone call last week to book the bikes on the train should have been all the warning we needed: we could book them on from Exeter to Tivvy, but not from Axminster to Exeter. However, the nice man on the phone said (and I’m sure I heard him wink as he did) “Guards discretion me dear, give ‘im one of your best smiles and he might let you on”. All week we’ve been practicing our best smiles

So anyway. Regular readers will be expecting rain, mud, wind or snow – or indeed at least a drama. Here’s how it went, prepare for disappointment!

The sun shone all day, and there was a breeze but certainly no wind, and although the shady spots were chilly, we were both quite happy in a short-sleeved jersey and shorts. Our matching jerseys seemed popular, lots of people commented ‘nice jerseys ladies’. One particular group cat and moused is the whole way, they stopped after every ‘up’ for drinks and chats and who knows what, we just kept plodding forwards and then they’d swoop past until the next hill! They bantered with us: “that’s the 5th time we’ve overtaken you ladies”… JB said “we’re being mistaken for ladies again”. Sure enough the next time the penny seemed to have dropped and we’d been relegated to “girls”! I’ll take that.

We’d been (not very) quietly dreading the big hill – remembering it from last year – we had each turned it into a monster of a thing in our heads, and after the stop st Ilminster we knew it wasn’t far away.

JB said “I’ll bet it’s not one of those times where you get to the top and say ‘that wasn’t so bad’”. When we ground towards the top, passing the odd person pushing their bike, and to the tight steep bend, I thought “I’m sure this bit is near the top” and “fuck me burd” we each said “who knew: that wasn’t so bad!”

A bit of mutual back slapping and laughing about being beaten up by our own brains and then “oh”. A near vertical ramp. I’d totally forgotten that one. No matter – we slogged up it too. Well, we had a train to catch

I shan’t bore you with all the rest of it. We made it to West Bay – a.k.a. Broadchurch where we collected our medals and goodie bags, got the by-the-sea photo and went to get some food before the ride out to the station. 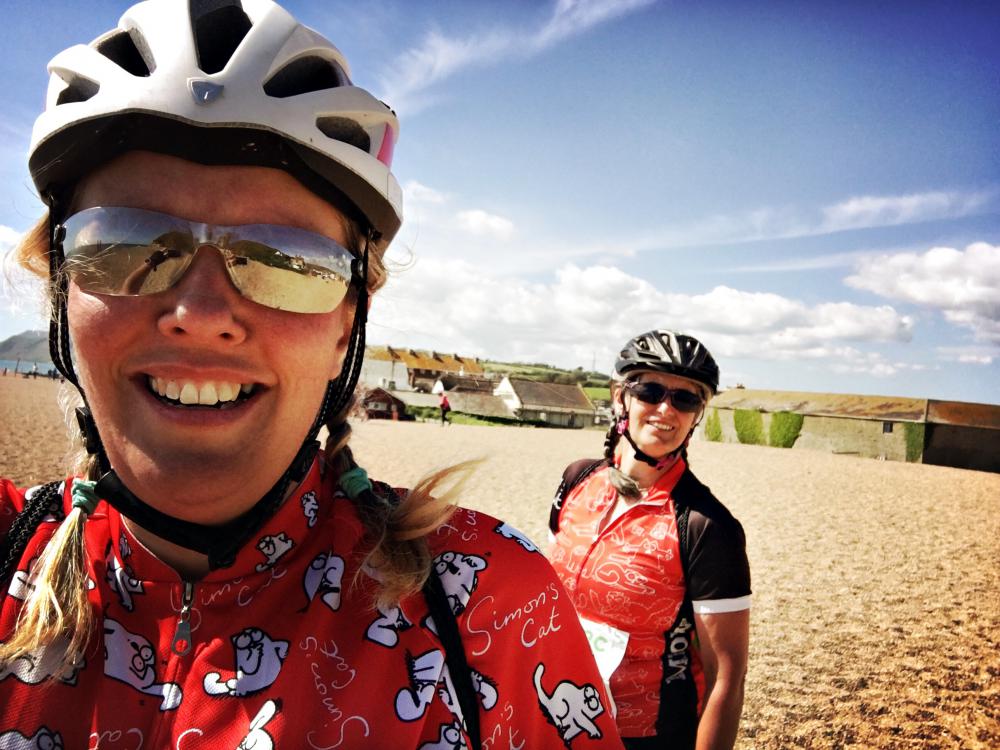 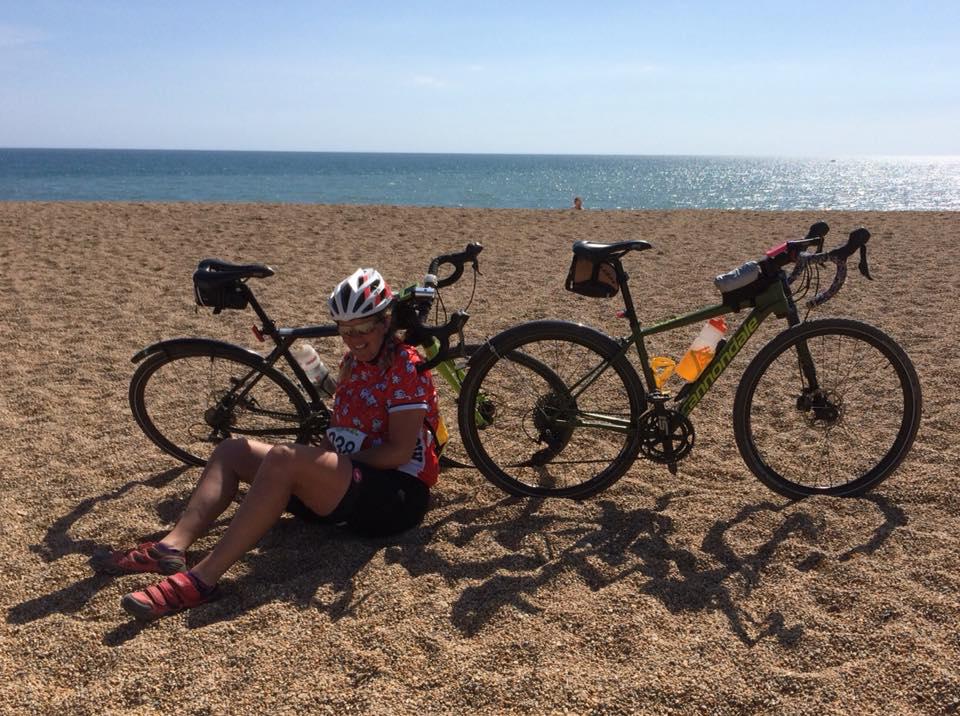 There. See? No drama. We necked a drink and some chippies and toasted sarnie, and I took JB on a quick tour of the Bay. “See over there? That’s where Blind-As-A-Bat-Barry fell in the harbour” I told her… true story.

Then we hadta leave, because Train.

We were following our Garmins pre-programmed route. They are brilliant except when you’re trying to get out a town. We were eventually spat out at the bottom of Bridport and headed back the way we came for a couple of miles until the turn off. Nice back lanes, the suns out, we’ve loads of time, even at the speed we travel. What could go wrong?

“Why won’t my bike work?” I asked JB. It felt like the chain had come off, but it hadn’t. “Click your gears” she said… I could tell by her face that she knew it was terminal: “Your free-hubs gone” she announced.

My what’s gone? Where’s it gone? 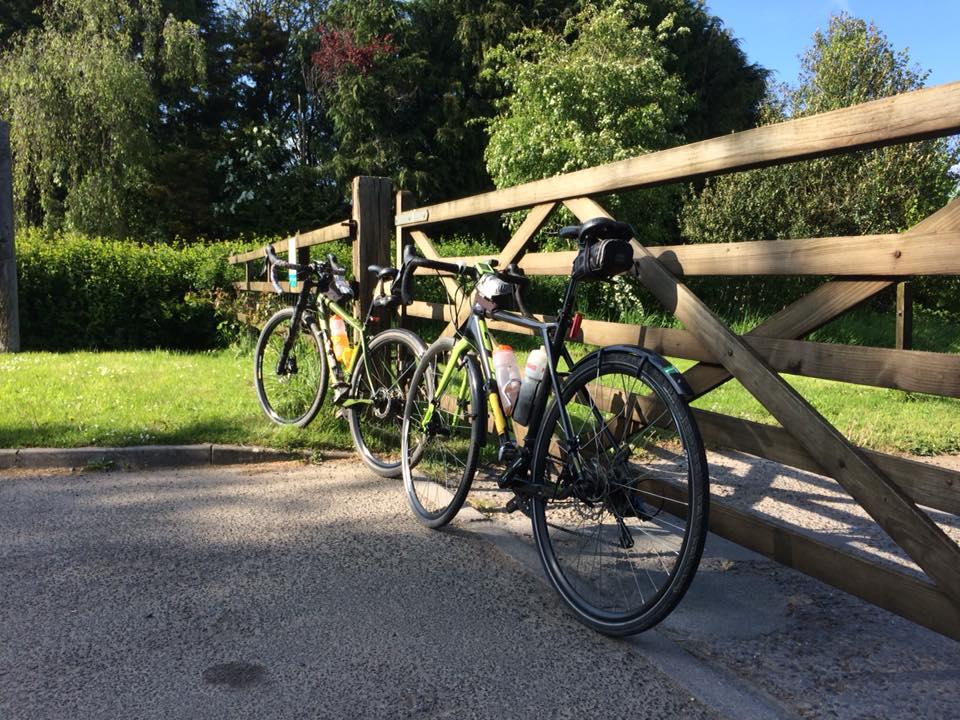 We knew then that we weren’t gonna make the train. And we weren’t gonna save MrJB or MrM and TB from fetching and carrying us after all. A quick phone call and MrM and TB were in their way. We coasted, actually, I coasted – JB, one hand on my back shoved me up all but the steepest of hills back to the main road where we made it to ‘Olland from School’s farm and the rendezvous point. 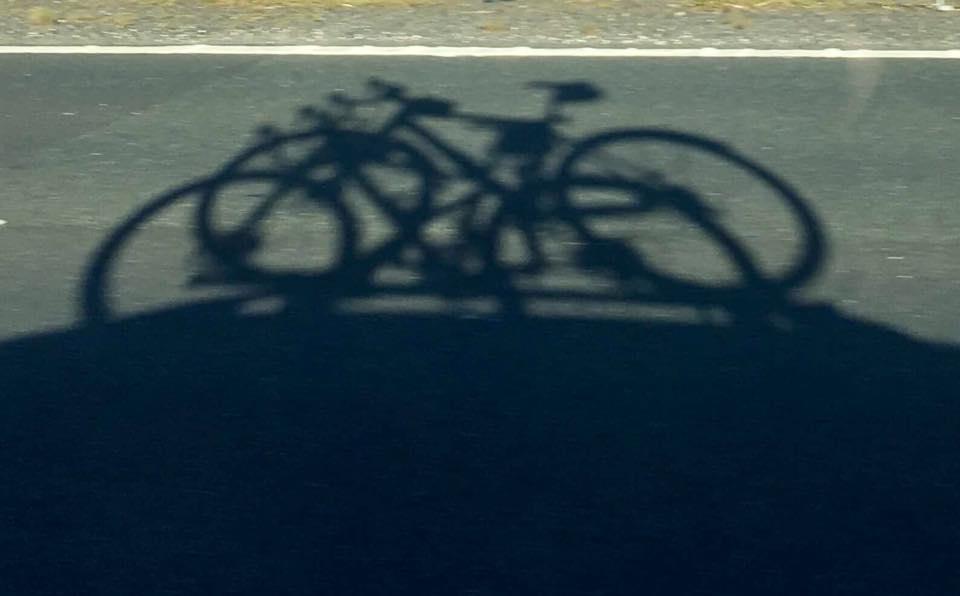 MrM and TB arrived about an hour later, we loaded up, did some grovelling and moaning and were on our way home, hours earlier than we should have been if we’d managed to make Plan A stick.

When I unloaded the bike at home i discovered she has a puncture as well!

It wouldn’t have felt right if the whole day had gone to plan and despite the ending, it was a great day and a lovely route through some of Dorset and Somerset’s finest countryside, and I do like the line across the counties on the Strava map