I wouldn’t normally blog about something as mundane as a training run but last night’s was a bit *different*.

JB will no doubt comment that I shouldn’t make such a fuss and that I need to Get Over It, or something like, but rightly or wrongly, it’s made me smile all day.

“We’ll go up Newts in the field and then down Manley” JB said, “meet at WA at 4:45”. Nothing unusual in that at all, we’ve done this route in reverse and I was feeling quite smug as I dug out my trail trainers, having forgotten them the last time. It should perhaps be noted that I don’t balance well, and am not at all surefooted.

So, garmin set, we rendezvoused at WA (not Western Australia – it’s not that kinda run…). “Oh fuck” I said, “I’ve forgotten my torch”. JB said “no matter, I’ve got mine” and with that we were off.

We are still Run-walk-running and it’s fair to say that our ‘marathon fitness’ has fucked right-off, but we are up to 4 minutes run now, and have even, on occassion, run a whole mile without stopping.

Anyhoo – I digress. There was a boring bit where we trotted about half a mile to the field gateway and into the field.

We both agreed that the field was a turned ankle waiting to happen with only one torch and that anyone with half a brain would walk, so we did. Nothing to do with the slippy, wet, near 20% nature of Newts Hill at all. It’s granny gear on a bike, no need to change the approach for running.

With the single torch we had to walk carefully although somehow we were both wider than we realised judging by the number of times we bumped into one-another. Over the ditch: JB first, me stranded unable to see a single thing… Bird… Torch shone my way and over the ditch and up the field, which was only half way up trainers muddy. The exit to the field is through a gap in the hedge – before ya say anything – it’s a footpath, just not exactly well loved. We squeezed through, grabbing hawthorn bushes for balance and popped out onto the lane. Now some structured RWR, along the lane and… wait – the torch has gone again and I’m being dragged right. Now, I’m shocking at left and right but I know there isn’t a right turning there, it’s someone’s house.

So we went into the house, well the garden, well through the gate in their garden; and lo: there’s a bloody track, and who knew? It went UP. My super-grippy-trail-trainers performed a couple of cracking wheel spins, almost putting me on my face before we were 10 yards up, JB pointed out all the exciting things with her torch, we hadta have a little conversation about not always pointing the torch the way she was looking. We slogged up the hill, agreeing again that running was Dangerous, for about an hour… well probably about 15 minutes, it was very steep.

When we reached the field at the top, we decided that it was time for a photo, Not A Rest. Tivvy looked really quite pretty in the distance: 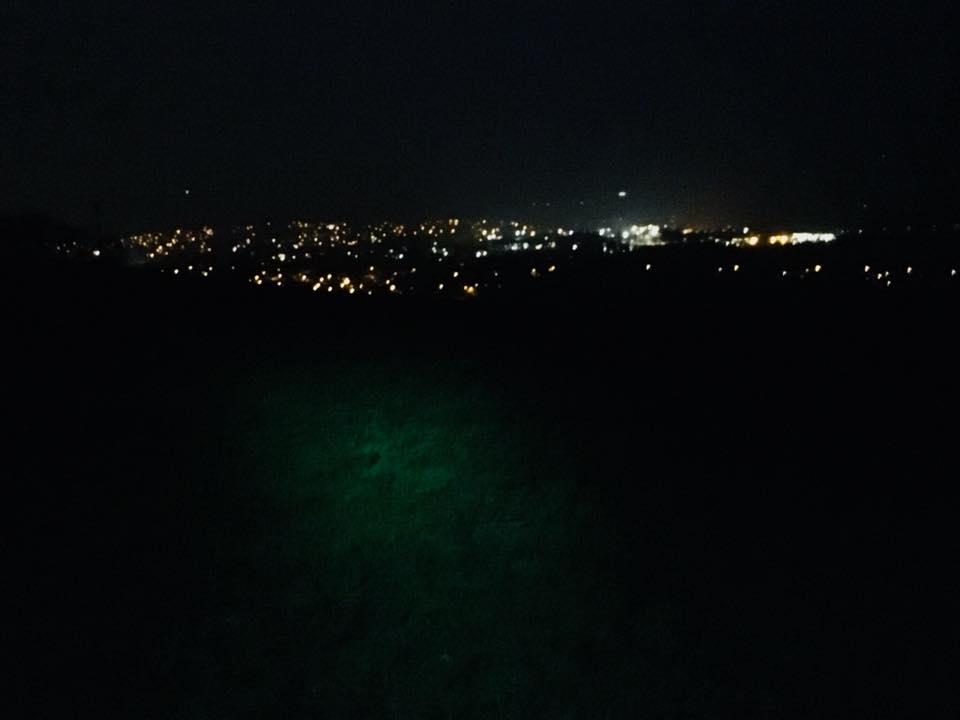 We climbed a bit further sticking to the tree-lined edge of the field – this makes sense, we laughed – out in the pitch black, in a field, in a storm – did I mention it was raining and blowing a gale? – under a line of trees. Still we made it through the field with no injuries and nothing at all fell on us.

JB said “I think we went this way, when I did the Russel”; “who the heck is Russel?” I asked. Turns out it’s a run from before my [running] time that doesn’t happen anymore – I could see why. Not being of Sound Sense of Direction, I followed JB into the next field and we began to mince our way through the cow shit and mud, which was by this time, close to being over the shoe deep.

“You never see cows in this field” said JB . Which we both laughed about, what with all the cow shit we were now covered in. We were making slow but steady progress, only occasionally bouncing off each other in the pitch dark. I love being out in the dark, but I had an uneasy feeling that something was Out There watching us. We rounded the corned of the field and the gate was in sight. JB shone her torch out into the field and Fuck Me!

A fucking bull was standing 10 feet away watching our every move. Along with his bitches – a whole bloody herd of them. Our every move got quicker, matching my heart rate! JB was muttering “nice cow, good cow” and they seemed to like it.

Then the mud got deep. Knee deep. And it wasn’t just mud. It threatened to take our shoes, we linked arms and lurched through it as fast as we dared, JB still muttering “nice cow, good cow” till we got to the gate, which was open! WFT? Now where? Wire, under the wire – that’ll protect us from the elephant sized Limousin bull giving us the eye. We relaxed a bit, and I suspect the bull and his ladies did too. I’m sure it’s given him something to take to the pub to tell his mates about… “you’ll never believe the pair of clowns in the field tonight…” etc.

The remaining run reverted to type, after we minced our way through the cabbage field we had found ourselves in, we went down a short bridleway – even managing to run a bit and were spat out on to the road, another little trot down the hill and we were at the safety of Manley bridge and our old friend the canal. We RWR all the way back to WA and the relative safety of our respective homes.

There was the usual and humiliating strip in the back garden and the BBROS (bare bum run of shame) through the house and into the shower.

My biggest mistake? Putting my trainers on the radiator to dry. I really shoulda washed them first. I’m sure the smell of warm cow shit will fade in time, and besides it’s given the cats something to be really interested in!

4.5 miles in an hour and 9 minutes. It felt like we’d been gone longer.

2 thoughts on “Something as mundane as a training run”